THE KING AND THE CORPSE

A king is obliged to carry the corpse of a hanged man on his back – but the corpse is not dead, it is possessed by a storytelling vampire, whose enigmatic puzzles threaten to burst the King’s head into a thousand pieces…

As much an encounter as a performance, this formidable collaboration by two core members the wild world music collective Transglobal Underground, brings an 11th Century Indian fairytale to the contemporary stage.

Enter a place of metaphor, magic and ritual.

‘not sure what I was expecting, but that was magic…I mean it…in fact I’m not sure what just happened – are we still in Soho?’

‘I loved the sitar, and I loved that the musician became part of the story. Her muttering in Hindi was great – didn’t matter that I couldn’t understand it – it was so evocative’ 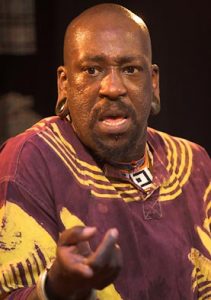 TUUP was born to Guyanese parents and raised in Acton, West London, Godfrey Duncan – TUUP (The Unorthodox, Unprecedented Preacher) – has been a professional storyteller since 1981, when he joined Ben Haggarty to form the West London Storytelling Unit. Truly an elder of the storytelling revival in Britain, his style is one of total improvisation, unbounded charisma and alarming spontaneity. His fabulous capacity for mimicry and ear for a wild story is outstanding.

TUUP has travelled the world extensively, telling stories all over Europe and in both Northern and Southern Africa. In his role as a creative lyricist, poet, percussionist and vocalist with the highly influential dance music collective, Transglobal Underground, he has performed throughout Europe, Central Asia, Asia and North and South America. 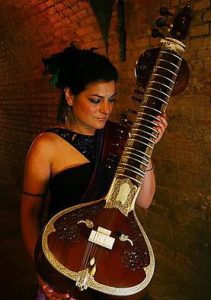 Sheema Mukherjee absorbed North Indian classical music and the western tradition side-by-side, studying sitar and Indian classical music under the tutelage of her uncle, the late Pandit Nikhil Banerjee and then with the late Ustad Ali Akbar Khan. Brought up between Britain and India, she has a rich background to draw on in her own compositions and collaborations. Today she is an established sitar player and composer; a regular in Transglobal Underground playing sitar and electric bass; a key member in The Imagined Village project; a formidable collaborator with internationally renowned artists from many genres.

Sheema has collaborated with internationally renowned artists such as Sir John Tavenor, Martin Carthy, Bobby Mcferrin, Boris Grebenshikov, Natacha Atlas, Noel Gallagher & Cornershop, Mercan Dede, the Bulgarian Folk singer Yanka Rupkina. Another significant collaboration is with UK saxophonist Courtney Pine and Sheema has been featured on his albums Back In The Day and Devotion and was a guest artist on the ‘On Track’ tour – a project for the UK Commonwealth Games. She has toured the world widely and key performances include The World Music Festival (Chicago), Montreux Jazz Festival and the Olympia-Halle (Munich), supporting Jimmy Page and Robert Plant throughout their European tour (1998), the Olympics Arts Festival for Sydney 2000 and also makes regular appearances at WOMAD (UK) with her own ensembles.

A versatile and creative musician, Sheema Mukherjee is continually evolving both as a composer and as a collaborator. Recent work has included an Indian Classical performance for Elton John’s Black Tie & Tiara Ball, an improvisation with Australian recorder virtuoso Genevieve Lacey in Westminster Abbey for The Queen on Commonwealth Day, and a creative development role in composition and song writing in Beijing, Hong Kong and Gateshead as part of the PRS Foundation and Composers and Authors Society of Hong Kong Creative Exchange Project. Larger scale work has included composition for full orchestra, for theatre, including Wuthering Heights (Tamasha), The Cornershop Project (Black Country Touring & Foursight), West Yorkshire Playhouse (Northern Exposure). www.mukherjee.co.uk