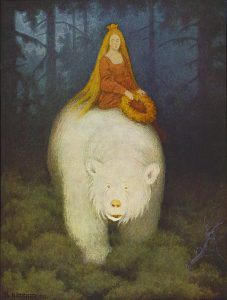 Step into the forest for a dark fairytale, as performance storyteller Sally Pomme Clayton takes the audience on a snowy journey, with a polar bear and a princess, trolls, stolen children, and a terrible curse. Set in a world of ice and snow, frost and firesides, the princess climbs the glass mountain to set the cursed bear free, but can she undo the terrible Troll Hag’s spell?

Magical and funny, tinged with darkness and pain, this is the perfect wintery romance. Sally Pomme combines vibrant spoken word with strange musical sounds, evoking other worlds, and a rich metaphorical transformation.

“Sally Pomme Clayton is a gifted storyteller who can bring the wonder of the most powerful stories from the past to life for audiences of any ages.”    The Guardian 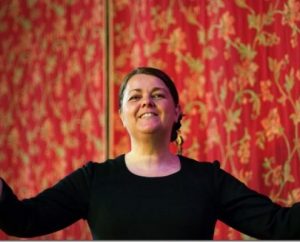 “Some people are born to entertain- Sally Pomme Clayton has that magic in plenty, she is a dream-weaver, a spell-binder.”  The Londonist

She performs stories for everyone from: Soho Theatre to Northern Stage; The London Gypsy Orchestra to The London Philharmonic Orchestra; Royal Shakespeare Company to The Royal Opera House; Hakaya Storytelling Festival, Jordan to Beyond the Border Festival, Wales; 40 Winks Hotel to 11 Downing Street; The Crick Crack Club to A Curious Invitation; The British Museum to The British Council; Apples and Snakes to Athens Storytelling Festival.

She co-founded The Company of Storytellers with Ben Haggarty and Hugh Lupton in 1985, spearheading storytelling across the UK.

She has published several children’s books, her latest is ‘Greek myths, stories of sun stone and sea’ (Frances Lincoln 2014).