“Have you seen the cloven hoof prints burned on the cellar steps? Have you heard the fiddle player cursing? Can you smell the scent of secrets in the candle smoke?”
In 2014 Tim Ralphs sold his soul to the Devil in exchange for the glamour of the Edinburgh Fringe Festival. Now he brings this one man storytelling show to Stealing Thunder. REBRANDING BEELZEBUB shines a spotlight on Him Downstairs in a performance shaped by razor wit, diabolical horror, absurd confessions and guffaws fit for the unholy host. Tim presents innovative re-imaginings of traditional tales as he exhumes the bones of old Devil stories and stitches them a new skin. This grand collection spans supermarket stalls, urban sprawls, mad drunken preachers and widow’s sons. Darkly humorous with disturbing turns and a distinct whiff of sulphur.
“A five star story” – The Times
**** Fringe Guru. 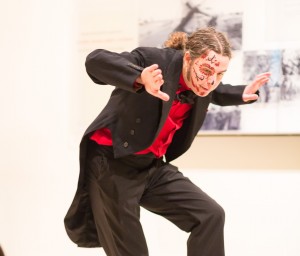 “Words that are applied glibly to other performers – such as brave, experimental and innovative – apply truly to Tim Ralphs. An imagination and talent such as Ralphs, spotlights storytelling as a thoroughly modern performance art form.”
Nell Phoenix, Story Nights Torriano
The ancient art of storytelling,
Innovation in spoken word.

Tim Ralphs is a storyteller and active exponent of narrative in art. He also works as a public engagement consultant where he focuses on connecting academic researchers with non-specialists.

His storytelling is rooted in the oral tradition: The craft of a speaker weaving language and gesture to entrance an audience and bring a tale to life.

Tim Ralphs gained much acclaim at “The Young Storyteller of the Year” competition in 2007, and was a British Award for Storytelling Excellence winner in 2012. He has performed everywhere from majestic Teutonic castle at Alden Biesen in Belgium, to the muddy Shropshire fields of The Festival at the Edge, to the sophisticated theatres of Soho and The Barbican. His audiences find him equally captivating whether they are partaking of some cake in a cafe, sitting spellbound around a fire in the woods, or dancing furiously while he lays down his words over a frenzy of experimental rock.

His stories are drawn from a rich medley of myth and folk tale, but also include live adaptations of absurd texts and wondrous reimaginings of classic fairytale material in evocative urban settings. As an ambassador and advocate for storytelling, Tim’s repertoire reflects the need for the craft to appeal to today’s listeners and tomorrow’s tellers.